Zug, Switzerland, 7 February 2019 – EuroChem Group AG (hereinafter “EuroChem” or the “Group”) a leading global fertilizer company, today reported consolidated sales for the fourth quarter of 2018 of $1.47 billion, 13% higher than in the same period of 2017. Stronger product pricing dynamics and an improvement in the sales mix lifted the Group’s sales for the year ending 31 December 2018 to $5.58 billion, 15% above the $4.87 billion achieved in the previous year.

The fourth-quarter performance took Group EBITDA to $418 million, 46% higher than in the corresponding period of 2017. This pushed the full-year figure to $1.52 billion, 34% ahead of the $1.13 billion achieved in the previous year. EBITDA growth was driven primarily by improvements in market prices for the Group’s main fertilizer products, together with some positive foreign exchange (FX) effects for rouble-denominated costs (RUB/US$: average 2017 – 58.35, average 2018 – 62.71).

For the year ending 31 December 2018, the Group generated operating cash flow of $982 million, some $67 million – or 6% – lower than the $1.05 billion recorded in the previous year. This was principally due to a 20% drop in the fourth quarter, although the full effect of this was alleviated by a stronger second and third quarter. Higher Net Working Capital and additional investment in inventories also contributed to the fall in operating cash flow.

“We have delivered a very strong sales performance, rounding off a terrific year,” said Kuzma Marchuk, EuroChem Group Acting Chief Executive Officer and Chief Financial Officer. “This leaves us well-positioned to ramp up our new potash and ammonia projects – and we expect continued growth in 2019.”

AN prices were stable 12M year-on-year (-2% to $186/tonne). Ukraine closed its market to Russian fertilizer companies and triggered a temporary oversupply for AN and its derivatives. As a result, AN prices declined in Q4 year-on-year (-14% from $216/tonne).

There was bullish market sentiment for potassium chloride prices. This was buoyed by tenders in Southeast Asia, amid limited availability of granular MOP and the application season in the US, which pushed MOP prices up in Q4 (+17% to $274/tonne FOB Baltic, spot) and 12M year-on-year (+12% to $256/tonne).

Fourth-quarter iron ore prices were supported by continued strong demand from end users looking to secure higher inventories before the start of winter production cuts – and a firm steel outlook. Prices rose on average by 11% to $74/tonne in the fourth quarter, yet decreased in the 12-month period year-on-year by 3% to $71/tonne. 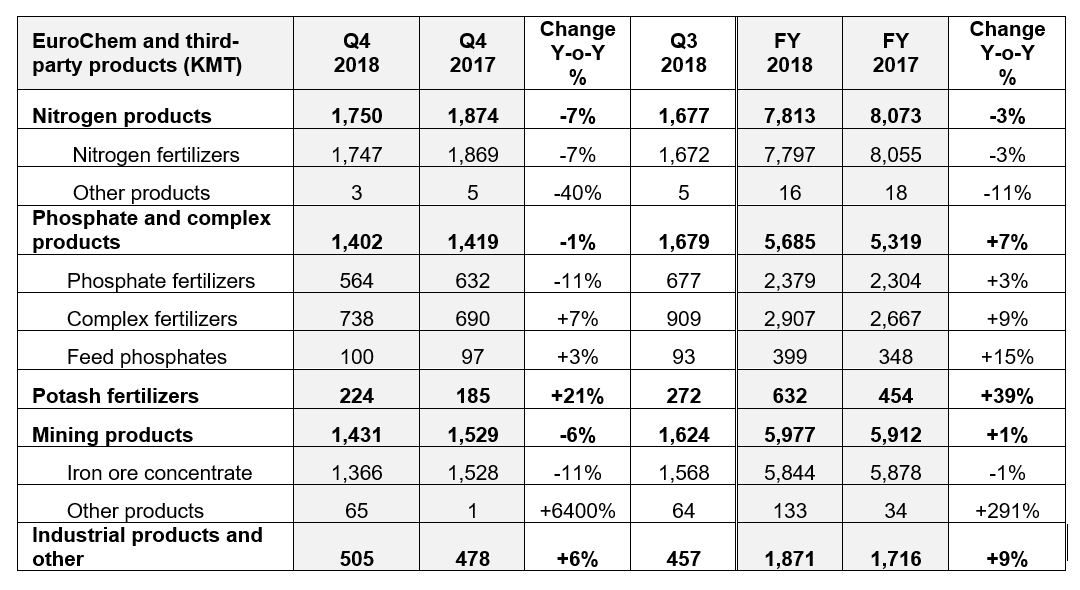 The Group achieved full-year fertilizer sales of 14.1 MMT, 2% ahead of the 13.8 MMT sold in the previous year.

Sales of complex and blended fertilizers increased by 9% year-on-year. The increase primarily stemmed from higher sales in Brazil, where Fertilizantes Tocantins (FTO) launched two new blending plants during 2018; one at Sinop in the commercially important northern region of Mato Grosso, and a second in the city of Catalão in Goias State.

Sales volumes of feed phosphates increased in 12M by 15% year-on-year, as an improved market balance supported increased sales in target markets in Europe, the US and Russia.

Iron ore sales were broadly in line with 2017. Strong domestic demand in Russia led to lower shipments of iron ore to Asia.

Low water levels in the European river system in the third and fourth quarters proved challenging for the industry. While the beginning of December saw a return to more normal conditions, several shipments were pushed into the first quarter of 2019. Overall, Europe remained the Group’s largest sales region in 2018, accounting for 29% of total sales.

Sales to North America increased on the back of the Group’s expanding presence on the East Coast of the US, coupled with a return to more favourable trading conditions.

Sales to Russia and the CIS trended lower as the Group’s exit from Ukraine – coupled with the devaluation of the Russian rouble – shifted sales to other markets, in particular Asia and Latin America. At the same time, stronger market presence supported higher deliveries to Azerbaijan and Moldova. The Group continued to improve its market capabilities in the CIS and signed new long-term distribution agreements in Armenia and Georgia.

Sales to Latin America received a boost from the Group’s new Brazilian assets as well as from growing sales at Emerger Fertilizantes, the distribution business acquired in Argentina in 2017.

The Group ended the fourth quarter with net leverage of 2.29x on covenant net debt of $3.45 billion and 12-month rolling EBITDA of $1.52 billion.

Several factors contributed to this reduction: increased net working capital amid overall market price growth for main fertilizers; additional investments in inventories related to the strategy of going deeper in distribution (building up inventory in Latin and North America with additional own- and rented-storage capacities procured in 2018); and temporary inventory growth in Europe driven by adverse weather conditions in Black/Baltic sea ports.

The Group allocated $320 million to capital expenditure (capex) during the fourth quarter of the year, bringing total spending on capex during the year ending 31 December 2018 to $1.11 billion, compared to $1.49 billion in 2017. Positive pre-dividend free cash flow (FCF) generation is expected in 2019 as EuroChem reaches the end of its investment cycle and its new ammonia and potash capacities ramp up.

The EuroChem-Northwest ammonia project in Kingisepp, Russia is supported by an off-covenant project finance facility. As of 31 December 2018, the Group’s outstanding indebtedness under the facility was EUR 473 million (US$541 million) out of the EUR 557 million available limit (+EUR 186 million YoY).

In October, the Group announced the expansion of its North American distribution network via the assumption of dry and liquid fertilizer transport and storage assets from international merchandising and trading firm Trammo, Inc. The move substantially boosts EuroChem’s fertilizer storage capacity in the US, and will enable the Group to strengthen its presence into Western Canada as well as on the East Coast. EuroChem now operates 25 warehouses in the US, with a current storage capacity of about 500 KMT.

EuroChem signed a research and development agreement with Belgium-based biotechnology company Aphea.Bio in November. The two companies will collaborate on the development of next-generation fertilizer technologies designed to significantly boost the take-up of key nutrients by plants. The research will utilize data and samples from scientific field trials at 10 different locations all over Europe.

In December the Group began production at Russia’s first Urea Ammonium Sulphate (UAS) facility at its Novomoskovskiy Azot plant. The new facility, built in partnership with leading urea technology developer Stamicarbon, has a projected capacity of 600 tonnes per day.

The two connected shafts and the plant are operating as planned in test mode. The two existing shafts are designed to produce 10-12 MMT of ore per year but are restricted to 7.5 MMT by the regulator while in test mode. The plant capacity is 2.3 MMT of finished pink product (equivalent to 6.5 MMT of ore). A total of 5.3 KMT of product was produced in the fourth quarter of 2018.

The cage shaft, which is not connected to the rest of the mine, was intentionally allowed to flood in 2015 as a result of a water inflow. A response plan was developed and executed, which included drilling and additional contour of six freeze holes, allowing engineers to sink the shaft partially and install an
additional ring of tubbing.

However, additional water inflow made it necessary to suspend further shaft sinking. Our site production experts are devising a further action plan to tackle the inflow. The remedial work will not affect the operation of the two existing shafts.

The outlook for nitrogen products in Q1 is positive. This is due to the simultaneous pull from North America and Europe, as those regions enter their seasons together, and domestic demand in China reduces available product for export, often a swing factor. Second-quarter urea will be weaker as the seasons finish, global demand declines and the price falls to attract new buyers.

Nitrates prices have also fallen between buying and usage periods but the domestic Russian season should bring stability for ammonium nitrate in Q1 as availability for export is reduced. As with urea, there will be pressure in Q2 as markets finish their main seasons. European CAN markets have experienced low demand due to a number of factors including weather conditions and high urea prices, but stable prices should prevail for the balance of Q1 before the usual repricing in May at new season levels. After a good run, UAN has come under pressure following competition from the US market, and this is expected to continue for the remainder of the first half of 2019.

The phosphates market is balanced, and stable pricing is expected throughout the first half of 2019. While the beginning of the year is mostly seeing signals of demand deferral, strong demand is likely by March in key markets such as the US, Europe and South America. Tighter capacities in the US will be offset by new production in North Africa and Saudi Arabia. A late demand coverage in China could have a negative impact on immediate export availabilities.

The outlook for potash is similarly stable, as the market is consolidates the gains of 2018. Strong demand is expected from Brazil and the US, but low inventories in India and continuing strong demand from China will keep markets tightly balanced, with moderate price increases expected throughout 2019. Uncertainty over delayed new supplies and reoccurring production issues at existing mines offers little hope to buyers of any short-term price pressure.

This EuroChem publication contains forward-looking statements concerning future events. These statements are based on current EuroChem information and assumptions concerning known and unknown risks and uncertainties.