The figure represents a more than two-fold increase from the previous year’s EBITDA and is attributable to a favourable pricing environment, a 6% increase in total sales volumes, and higher operating efficiencies.

“These encouraging results will allow EuroChem to build upon its position as a leading global fertilizer player,” said CEO Vladimir Rashevskiy. “The supportive environment enables us to set even higher goals for ourselves and invest in ambitious new projects to stay on our growth trajectory.”

Capital expenditure rose 6% year on year to US$1.24 billion with construction continuing on the EuroChem Northwest 2 ammonia and urea plant, and Ust-Luga, a new 8 MMT capacity transshipment terminal on the Baltic Sea, among other projects.

EuroChem experienced several milestone events in 2021, including the ramp-up in potash output to 2.6 MMT from the Usolskiy and VolgaKaliy plants; and the signing of two share purchase agreements in Brazil – the Serra do Salitre phosphate mine and plant and the Heringer distribution business. These additions to EuroChem’s global asset portfolio will support production in the company’s home markets by opening new supply channels in important agricultural regions.

“With the right mix of organic expansion and carefully managed M&A we can lock in sustainable long-term business growth, and, importantly, continue to invest in our own production base,” Mr Rashevskiy said.

In terms of its finances, the Group significantly improved its capital structure in 2021 by reducing its total debt, optimizing short-term debt share and its overall debt portfolio. EuroChem received ratings upgrades from Moody’s, S&P and Fitch through the course of the year. 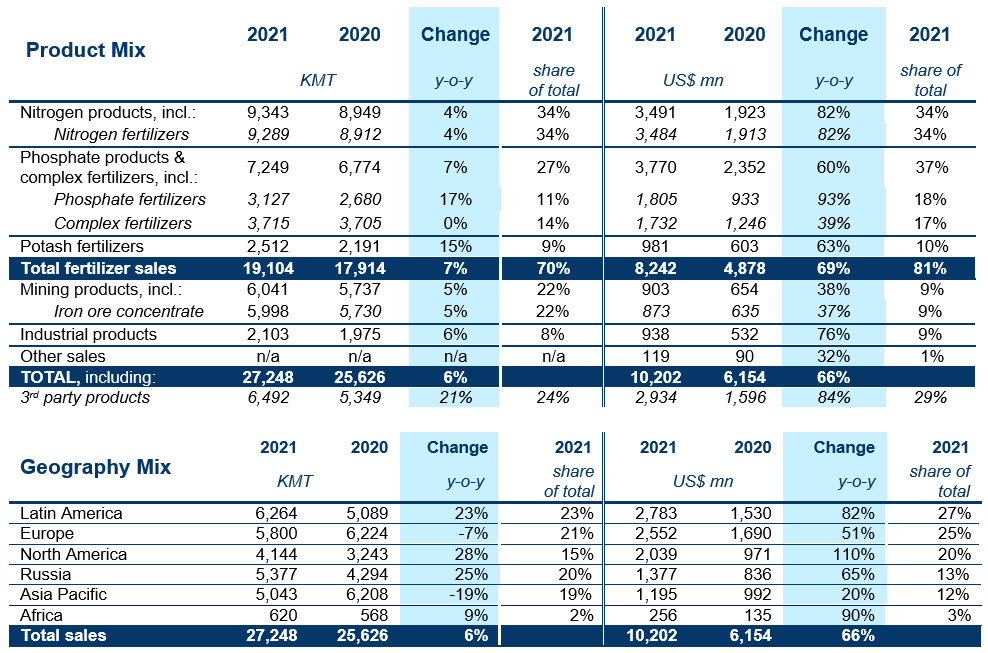 Tight markets were a feature of 2021, a year dominated by high gas prices and political developments. Curtailments and countervailing duties impacted global trade flows, which made for a fiercely competitive environment, but also supported strong results by rewarding the more flexible and diversified operators. Against this backdrop, EuroChem posted total sales volumes of 27 MMT in 2021, a 6% rise on the previous year with third-party products up 21% and accounting for 24% of sales volume. The increase was reflected across all segments, with nitrogen up 4%, phosphates 17% and potash 15% on the back of the company’s ramp-up of the Usolskiy and VolgaKaliy potash projects.

Sales volumes in the nitrogen space continued to be driven by urea, which rose 18% to sales of 3.4MMT amid tight markets in Europe due to high energy costs and limited availability from China. Ammonia sales rose 33% to 700 KMT in a market also impacted by elevated feedstock costs that kept prices high and supply short, with some European capacity idled. EuroChem became self-sufficient in ammonia after the 2019 launch of our 1 MMT/a capacity EuroChem Northwest 1 facility, which in 2021 produced 991 KMT. UAN sales volumes dropped by 10% to 1.4 MMT year on year, however US sales remained roughly flat despite the imposition of preliminary antidumping duties on imports from Russia and Trinidad and Tobago.

In phosphates, sales of MAP/DAP climbed 10% to 2.6 MMT, with third-party product sales accounting for roughly 40%. That together with the Group’s own production of phosphates fertilizers in Lifosa, one of EuroChem’s EU assets, helped to increase sales volumes in the US by 38% year on year.

EuroChem’s gradual introduction of potash into global markets passed the 2.5 MMT mark in 2021, an increase of 15% year on year. Prices have been kept high due to supply restrictions stemming from political sanctions on Belarus and temporary supply disruptions from other key producers. Global potash market fundamentals remain bullish.

The Group’s geographical sales base continues to be strongly diversified across key markets, dividing principally among Europe (21%), North America (15%), Latin America (23%), Russia (20%) and Asia Pacific (19%). Year-on-year reductions in volumes to Asia-Pacific (-19%) were attributable to iron ore volume redirection to the local Russian market (-24% year on year).

EuroChem significantly decreased leverage in 2021 with strong EBITDA generation and debt repayment. The share of short-term debt was reduced by 27% to $1 billion as at end-December.

In 2021 EuroChem redeemed in advance in full the $526 million non-recourse project facility for the EuroChem Northwest ammonia plant, together with a number of other bilateral and syndicated facilities.

EuroChem received ratings upgrades from international rating agencies: Moody’s moved EuroChem up one notch to ‘Ba1’, while Fitch revised its outlook to ‘positive’ at BB level, and S&P also upgraded EuroChem one notch up to a ‘BB’ rating with a ‘stable’ outlook.

At EuroChem Northwest 2, our new 1 MMT/a ammonia and 1.4 MMT/a urea project in Kingisepp, Russia, we entered the active construction phase and remain on track to come on stream in 2023. Project capex spent as of December 31, 2021, stood at US$738 million or roughly half of total project costs. EuroChem Northwest 2 will be 80% funded by an off-covenant long-term project finance facility.

Usolskiy Potash Plant is expanding its Phase 1 facility, with EuroChem on track to deliver a 2.7 MMT capacity plant soon. MOP production for 2021 amounted to 2.39 MMT.

At our VolgaKaliy Potash Plant, the mine plan has been adjusted and coordinated with the shaft construction schedule following the integration of a new Mine Planning team. The site produced 228 KMT in 2021, with all volumes successfully sold to market.

SaratovKaliy Potash Project. Exploration work continues at EuroChem’s potential third potash project outside Saratov in southwest Russia. Following positive analyses provided by 2D surveying, 3D seismic studies results will be available in the second quarter of 2022. The full feasibility study from this highly promising site will be completed in 2022.

Ust-Luga transshipment terminal. EuroChem took the decision to build an 8 MMT capacity transshipment terminal in Ust-Luga, Russia. The port will serve as an important logistics terminal for product arriving by railcar from the EuroChem Northwest complex, just less than 50 kilometers away, and other EuroChem and third-party cargos. The project passed to the execution stage in 2021 and is scheduled for completion in 2024.

Salitre do Serra. In August 2021, EuroChem signed an agreement to acquire the Serra do Salitre phosphate project from Yara International ASA, in a deal worth US$410 million. The project comprises a 350 MMT open pit and an upstream production plant that will, when it comes on stream in 2023, add 1 MMT of phosphate production capacity through the Group’s MAP/NP and SSP/TSP product lines. The mine and plant are located in the agricultural heartland of Brazil in the southeastern state of Minas Gerais. The deal is scheduled to be completed in February 2022.

Borealis Nitro. In February 2022, EuroChem announced that it had entered exclusive negotiations to acquire the nitrogen business of the Borealis group after having submitted a binding offer for an enterprise value of EUR 455 million. Borealis Nitro operates five production plants in Austria and France and Germany. With more than 50 distribution points across Europe and around 4 MMT of products (including 800 KMT of technical nitrogen solutions and 150 KMT of melamine) supplied annually in Western, Central and South East Europe, the business is viewed as a highly promising complementary asset to EuroChem’s global operations.

Despite geopolitical tensions, the importance of the agricultural and fertilizer sectors for global food security supports a favorable market outlook for 2022. The IMF projects that the global economy will grow by 4.9% in 2022, meanwhile macro conditions will remain inflationary for commodity markets.

Continued strong grain prices are supporting farmer economics and driving fertilizer demand across all nutrient groups in 2022. Trade export protectionism and sanctions restrict global trade flows and supply volumes, while unprecedented high gas and energy costs are driving up the marginal costs of production. Although some of these market drivers are expected to ease throughout 2022, they remain supportive of higher fertilizer prices on average in 2022 versus 2021.

In spite of new nitrogen capacities to be launched during 2022, persistently higher marginal supply production costs look to maintain prices at a higher level on average in 2022 compared to 2021. In phosphates, restrictions on exports from China in the first half should keep the market tight, global inventories low and support higher prices in 2022 overall. The potash market, meanwhile, will shift into a more balanced position in 2022 due to supply increases from Canada. However, the impact of Belarus sanctions on potash supply and demand will support firmer prices.

This EuroChem publication contains forward-looking statements concerning future events. These statements are based on current EuroChem’s information and assumptions concerning known and unknown risks and uncertainties.

Note: Figures may not recalculate exactly due to rounding. Percentage changes are calculated based on whole numbers, not the rounded numbers presented. All dollar amounts are US$.

EuroChem is a leading global fertilizer producer, and one of only three companies worldwide with manufacturing capacity in all three primary nutrient groups: nitrogen, phosphates and potash. A vertically integrated company, EuroChem is expanding its production and distribution capacities in key regions around the world. The company’s growth is primarily driven by significant investment in the modernization of existing, and construction of new, nitrogen and complex fertilizer plants, the ramp-up of two large-scale potash projects, and underpinned by an operational efficiency drive across the full value chain. The Group has key manufacturing facilities in Russia, Belgium, Kazakhstan, and Lithuania, employing more than 27,000 people in 40 countries, and with a product reach of more than 100 countries.

For more information, please visit www.eurochemgroup.com. Any media or analyst enquiries should be directed to the appropriate EuroChem Group contact, as listed below: